I want you to watch this video, courtesy of Spartan Race, before reading further. Pay close attention to the men in military gear.

END_OF_DOCUMENT_TOKEN_TO_BE_REPLACED 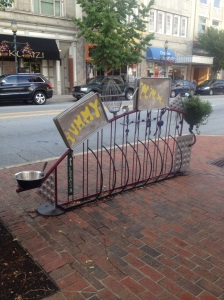 Officially you will know it as the Florida, St. Augustine – Bike MS: PGA Tour Cycle to the Shore. For years I have watched as friends pushed through 150 miles on their bikes in an effort to raise money to fight Multiple Sclerosis. The distance is considerable and quite frankly intimidating. The longest I have ever ridden is 54 miles, though as a fool the mantra of “no stopping” made it much more damning.

Marc’s annual diligence met with a yes in 2013 so I will proudly wear the Team Melrob jersey. If you have found this site and would like to support the cause you can donate at my National MS page here.

The back story to this endeavor is my donation goal. A friend at work, who was my first donor, asked why the goal was so low. She shared with me the story of a friend who annually has a goal of $3,000 to raise for breast cancer, further noting that while lofty that figure is consistently met.

Two words appeared in my vision: lazy and guilty.

It had not occurred to me how it must appear that my goal was the minimum to raise. How little must I care about the cause to put forth such a minimal effort. What must be required to meet a four figure goal, do I know how to gather the support and do people like me enough to put their money behind my endeavor?

The truth, and it is simple to a degree, is twofold. First, I set the goal low because I am participating in events that raise money for charity at least three times a year. How much can I ask of my friends, family and acquaintances at that frequency? Second, my expectation is generally that all you need to give is $1. If you can give more, and want to give more, then I am grateful for your generosity and in turn the giver should be grateful for their economic place in life.

However, upon reflection the reality was that I am selling myself and everyone else short. The case should be made as to the importance of this charity. Additionally I should have more faith in people such that they will want to help. Surely there are deeper psychological truths begging to be unsurfaced but I will invoke Occam’s Razor relative to the bigger picture.

So with the low bar goal made, the push is to reach a donation figure that will become next year’s standard. My gratitude to those who have the means to give. All that is left to do is keep training and over think how the ethical use of social media. I can assure you I could use more honey.