END_OF_DOCUMENT_TOKEN_TO_BE_REPLACED

How many out there follow British/English Premier League Soccer? A few years ago, at a point when the business machine of college and professional football here in the United States was beginning to disgust me, I turned my attention across the pond. While not a life long passionate soccer fan, I am a dedicated World Cup viewer. When the Summer Olympics came to Atlanta the one ticket I had to get was a men’s soccer match, and we were doubly rewarded. We were there when Nigeria defeated Brazil on their way to Olympic gold. Upon leaving the stadium the crowd was informed that tickets still remained for the women’s gold medal match between the U.S. and China: So we grabbed two and witnessed history.

Wanting something different, while knowing that British soccer is not distinct from other sports institutions, I researched teams and decided Newcastle United would be my club. It is relatively close to where my family hails from, Fulford, and the fan base is a passionate bunch with a rich history. Deciding I also wanted to cheer for an American player I added Everton to my small pantheon being that Tim Howard is their man between the pipes.

Two weekends of Derby play saw Newcastle lose to Sunderland 0-3, making this a sweep for the season in which the Magpies were shut down 0-6.  Last week saw Everton lose their Derby match to Liverpool 0-4.

But it is just sports, something that is more a respite than foundation. A news story that put that in context was one the Today Show highlighted yesterday. It told the story of Sam Polk, a once greedy Wall Street success story who dropped that life because he realized it was destructive. You can read about it here.

END_OF_DOCUMENT_TOKEN_TO_BE_REPLACED

Last night my son was part of a two-man presentation at our local outdoor store where he works, Black Creek Outfitters. Along with Jack Stucki they spent a good two hours detailing their respective adventures on the Pacific Crest and Appalachian Trail. The presentation topics included gear, food and mindset. On a personal note it was a proud moment through which I observed my son sharing his passion in a professional atmosphere.

One comment that Jack made stood out, and it greatly serves Clear Sky Friday, was inspired/taken from Zach Davis’s book Appalachian Trials. Part of Jack’s closing comments to the audience centered around why one might commit themselves to months on trail, a question Mr. Davis writes about as being elemental to answering if one is to best maximize the adventure. With my longest section hike being four days, the “why” of an extended hike had never been considered beyond the answer “I just like to hike”.

Both Jack and Evan, when speaking of memories, found that the community of hikers was a grand emotional monolith. From Trail Angels to a simple person willing to give a tired hiker a ride, the basic good you find while on trail is special. Being a hopeful cynic, this is what my “why” would be. To see the good in humanity. Yes it exists apart from trail, but the quiet of the hike along with the kindness of strangers amplifies it.

With that in mind, here is an article which reminds us that good is all around us if we just look for it. Link courtesy of Sustainable Man via Facebook. 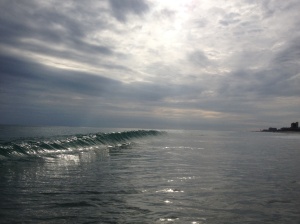 The rain came to Jacksonville roughly three hours ago. While the onslaught consumed my area of the city there was still blue demanding to be seen through the gray. In anticipation of today’s lawn fertilization my Thursday post-work activity was prepping the yard, which means mowing, trimming and edging. That the sky gave an offering to the cause was an added benefit and at present the late-afternoon sky appears to be a cloud thinning event.

As I prepare for tomorrow’s MS150 my mind is considering all of those who suffer daily from an ailment that impacts their ability to be normal. Do they need help simply getting out of bed? Can they not focus long enough to read? Is hiking, swimming, biking, walking, sitting, laughing, talking so painful that they must seek other means of life stimulation? Will they never be able to see themselves as independent? Does each day demand an answer to “how will I afford this?” as opposed to  “what can I accomplish?” Is helplessness a frightening reality while love stands as a mocking stranger?

The trite next question is to ask “what are we doing about it?” but there are a myriad of complicated questions to be asked even prior to knowing what help would mean to any of those in need. So while in the throes of training (there are more events to come), something which has kept me from taking the opportunity to writer for a local magazine, and amidst a close friends reminder to make time for important things, the idea of “good” became less defined.

This week’s post focuses on taking something away from someone. It focuses on character building and how being “good” sometimes coincides with what might be considered punishment.

Matt Labrum, a football coach at Union High in Roosevelt, Utah, suspended the entire varsity football team. It was a response to bullying but it was also an aggregate of generally bad behavior. While the act itself is news worthy, that the coach made an effort to stress the story was about the players and not him gave it a sense being good for the sake of good. It would have been easy to grab the spotlight and pat one’s own back. Read CBS Sports writer Gregg Doyle’s article about it here. Or go to the original story from the Deseret News here.

That’s how Rook paid his penance — well, that’s how he started to pay his penance — for being part of the Union High football team. Understand, Karter Rook isn’t necessarily a bad kid, and he seems actually like quite a nice one. Lots of these kids are no doubt good and decent people, but what was happening at Union High was too pervasive for the coach to pick and choose who to punish. Besides which, Matt Labrum didn’t know exactly who had been behaving the worst.

He knew which kids were acting up in class, who had skipped some school, whose grades were slipping. Labrum teaches gym at Union, so if any of his player have issues at school, he’s going to hear about it.

It was the bullying that drove Labrum to act. It was done anonymously, on a social networking site called Ask.fm, but the victim went to a Union High guidance counselor and laid out the evidence that suggested the tormenters were members of the football team.

Enough, Labrum decided. Enough. He met with his coaching staff a few days before Union’s game last Friday against Judge Memorial Catholic High, and deep into the night they kicked around disciplinary ideas until finally settling on this one:

Everyone’s off the team.

My thanks to a certain morning show for changing its image and possibly the type of news it is going to report. It was very hard to remain glib and cynical in light of the good deeds which have been passed across our television screens and shared amongst beverages of all types. Such an emotional current has swept me into its rapids and hence a new weekly post to hopefully clear the negative brambles as you enter the weekend.

Add this to my Tuesday quotes post that has lacked any level of consistency but by god I will keep pushing that stone up the hill.

This weeks winner is Joey Prusack. Read about his good act on The Blaze but here is a teaser.

Prusak said that last Tuesday, one of his frequent guests, a man who is blind, walked into the local Dairy Queen. When the blind man took out his wallet to pay, a $20 bill slipped out of his pocket. An elderly woman behind the blind man then quickly snatched the bill off the floor and put it into her purse.

Prusak took matters into his own hands.

Repost from @consequence • Watch Tears for Fears' own Curt Smith perform a special rendition of "Mad World" with his daughter, Diva, at the link in bio.
Good morning. This is my dog. He should inspire a smile on your face. And no, he is not electric. #morning #jacksonville #jacksonvillefl #pets #dogs #happy #joy
Someone else’s view from Mount Jefferson in Nee Hampshire. I miss you Presidential Range. @stefhikes
A perfect bottle for isolation. @jeffersonsbourbon #oceanaged
#mlk
@ourplanetdaily reminds us nature is doing its part to maintain order.