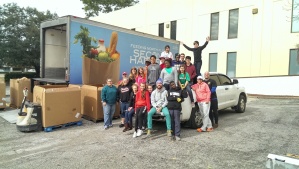 This past Saturday was the Second Harvest City Wide Citrus Glean in Jacksonville, FL. Officially the title is qualified as “Second Annual” as it was the second hear Second Harvest and Society of St. Andrew (SoSA) coordinated efforts to feed the hungry by picking fruit that would normally fall and rot.

My role was retained from 2013, which meant the responsibility of site coordinator for the San Jose area. Last year we had approximately 20 volunteers, and those could not reach all the houses on the list. Sunday found me gleaning an additional three homes. However, this year the volunteer count was approximately 80, which meant all houses on the list had their trees picked clean. Thanks to the work ethic of those in the field we were able to glean from an additional three houses. Those volunteers were out from 9:00 am until 2:00 pm, and thanks to the weather the day was more redeeming than expected.

From church youth groups to local business to mindful individuals, people from a variety of beliefs, cultures and socioeconomic areas gathered for a common goal: affording the less fortunate something many of us take for granted. From a 2011 Yahoo article:

“Almost 15 percent of households in America say they don’t have enough money to eat the way they want to eat,” Seligman said. Recent estimates show 49 million Americans make food decisions based on cost, she added.

Per Elliot Darkatsh with Second Harvest these were our weekend results:

In about 4 hours on a chilly Saturday, over 400 volunteers were deployed to pick from about 130 homes.

Here are the results (in lbs):

Total:     26,349 lbs of citrus!  This was a slight increase from last year, which considering the freeze this year is good.

I could not find my data for San Jose from last year, but I know we were far above that count.

Gleaning is a great way to meet new people and to be a positive impact for change in the world. I work with SoSA. Find one in your area.

USDA’s How to Glean